The Structure of Lactadherin
Lactadherin (MFG-E8) binds, Ca++-independently, to phosphatidyl-L-serine via the C2 domain and binds the avb3 and avb5 integrins via the second EGF domain. The one letter amino acid codes refer to identified amino acids that participate in binding. For the C2 domain the capital letters refer to water-exposed hydrophobic residues.

Lactadherin is a widely distributed glycoprotein (~ 50 kDa), which was originally characterized due to its association with milk fat/lipid globule membranes. Synonymous names are PAS-6/7, bovine-associated mucoprotein, BA-46, P47, and MFG-E8. Structural hallmarks of lactadherin are the presence of two epidermal growth factor (EGF) homology domains (with an RGD peptide motif in the second EGF domain), and two C domains sharing homology with the discoidin family of lectin domains including the phospholipid-binding domains of blood clotting factors V and VIII. Lactadherin shows preferential binding to phosphatidylserine (L-form) in a calcium independent manner, and binds more specifically than Annexin V. 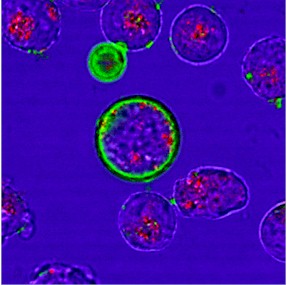 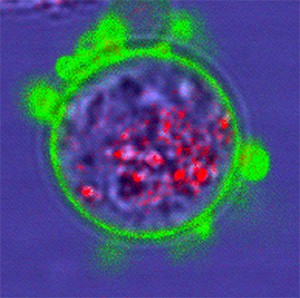 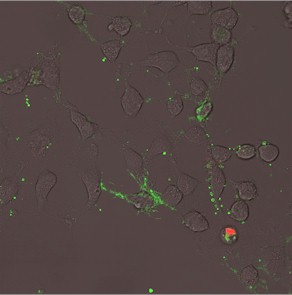 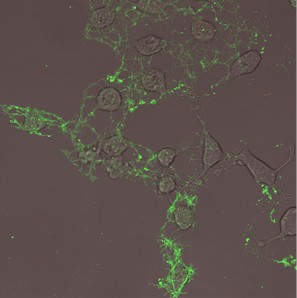 Above: Phosphatidylserine exposure in mouse mesenteric venous thrombosis.  Mice were given 1 µg each of lactadherin and annexin V by tail vein immediately prior to externalization of the mesentery. The mesentary was exposed to ferric chloride and then the animals were perfused with saline/paraformaldehyde. Serial sections of the mesentary were stained with anti-fibrinogen/fibrin (left), anti-platelet (middle), and anti-lactadherin antibodies (right) developed with the alkaline phosphatase Vector Red substrate. A layer of fibrinogen/fibrin (left, closed arrows) overlaid a mural hemorrhage (open star). Platelets (middle) were scattered along the luminal surface of the thrombus (open triangles) as well as upon fibrinogen/fibrin strands extending into the lumen. Lactadherin staining (right) was strongest along the raised endothelium surface (closed arrow), including adherent platelets close to the wall. Platelets on fibrin strands did not stain detectably (open arrow). (Shi J, Pipe SW, Rasmussen JT, Heegaard CW, Gilbert GE. Lactadherin blocks thrombosis and hemostasis in vivo: correlation with platelet phosphatidylserine exposure. J Thromb Haemost. Jul 2008;6(7):1167-1174).

FITC-conjugated bovine lactadherin (BLAC-FITC) is supplied as a 100X stock solution (1.6 micromolar) in a buffer of 20mM Tris, 150mM NaCl, pH 7.4 containing 1% (w/v) bovine serum albumin and 0.02% sodium azide.  Assuming that most labeling reaction volumes will be approximately 0.5ml, a 1 ml vial of the 100X stock material will be sufficient for 200 labeling reactions.  Additionally, as this product is fluorescently labeled it should be protected from light.

For a typical cell staining experiment, apoptotic cells are collected by centrifugation and  resuspended in a physiologic buffer such as TBS (20mM Tris, 150mM NaCl, pH 7.4), HBS (20mM Hepes, 150mM NaCl, pH 7.4) or PBS (4.3mM Na2HPO4, 1.47mM KH2PO4, 137mM NaCl, 2.7 mM KCL, pH 7.4) to a final cell count of approximately 1 x 106 cells/ml.  Adherent cells may be harvested by trypsinization, but should be washed at least once in either media or buffer prior to making the final suspension in buffer.  Stock 100X FITC-conjugated lactadherin is added to the cell suspension at the rate of 5 microliters for every 0.5ml of the cell suspension.  At this point, optional staining with propidium iodide (PI) may be initiated by adding PI to a final concentration of  0.5 to 1 µg/ml.  Incubate the reaction mixture at room temperature (protected from light) for a period of 5 to 10 minutes.

Labeled cells may be analyzed by a variety of methods including flow cytometry and fluorescence microscopy.   Fluorescence detection may be monitored using the following detector settings:

Other references of interest: